That story is the second part ("City of the Zombies") of a whole ("The Hateful Dead" being the first part). It was eventually published in the USA by Dark Horse comics (comics format, glossy paper and softcover) after Apocalypse Ltd went bankrupt. Italian edition: this story has been reprinted by RW edizioni in March 2014 (see here for details) in the third volume adaptation of the recent US DC Deluxe Edition: Spanish edition: this story has been also reprinted by ECC Ediciones in July 2014 (see here for details) in the third volume adaptation of the recent US DC Deluxe Edition: 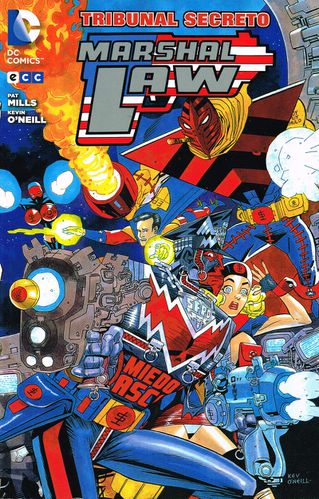 After those of the cemetery, it is the "preserved" Golden Age superheroes who are resurrected at the Victory Museum by Black Scarab and his toxic fluid. They will want to go after Marshal Law whom they believe is a Nazi super soldier. But the latter has also much to do with a  "living dead" girlfriend.